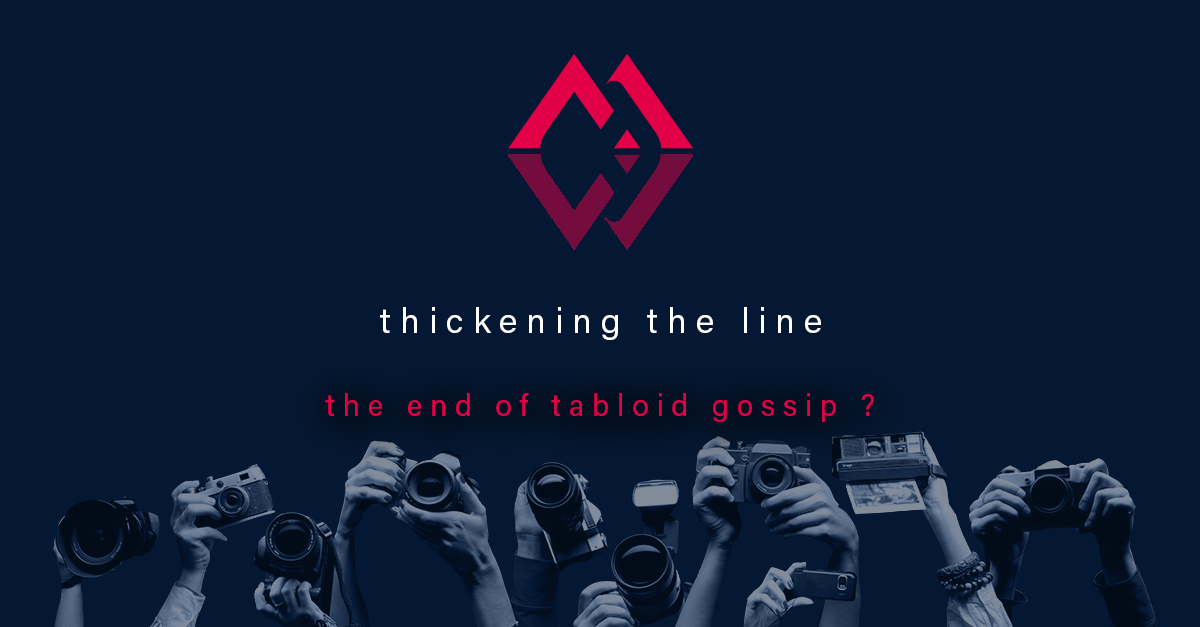 Thickening The Line: The End of Tabloid Gossip?

The digital revolution and expansion of the online sphere has had profound implications for the way we consume media. Not only has social media facilitated a platform from which audiences can access content, but it’s revolutionised the way in which we process, discuss, and ultimately enjoy the products on offer to us. The proliferation of online technologies has created a forum of discussion where people go to react to their content – this is part of the modern viewing experience and is encouraged by networks as a form of free, easy, and organic advertisement. Whilst this does promote ideals of community and discussion, this type of consumption encourages a plethora of views and opinions. The nature of social media means all reviews and comments are public and – whilst this is often positive – it means those who produce the media we consume see and hear all that is said. This means that ‘tabloid’ opinions are amplified and proliferated more than ever, which challenges the traditional relationship between talent and the media. Now, with the ability to see and hear all that is said about them, is it right that society so freely talks about and critiques those in the public eye? Is it fair to subject people to intense and often conflated scrutiny?

The internet has most certainly supported and amplified this ‘conversation culture’ that now surrounds the most popular forms of entertainment. People now discuss and critique what they have just viewed, with the activity and conversation surrounding products now becoming a part of the enjoyment factor. The issue is that social media amplifies all opinions, which encourages ‘trolling’; malicious online behaviour characterised by aggressive and deliberate provocation of others. These ‘trolls’ can have a detrimental effect on the wellbeing of celebrities, who are vulnerable as social media offers a direct line of communication.

Although it would be unfair to class him as a ‘troll’, the recent dispute between the LBC presenter Steve Allen and Strictly Come Dancing contestant Tilly Ramsay highlights the concerns surrounding the wellbeing of celebrities and the commentary they receive. Allen, speaking on his radio show negatively reviewed Ramsay as a ‘chubby little thing’, leading to backlash and a response from Ramsay in which she said she would ‘draw the line’ at people making comments on her appearance. Although this is not as offensive as most online abuse, it conveys the ‘conversation culture’ that surrounds celebrities, as Allen had no qualms criticising the weight of a young girl to his listeners.

This is expressive of a growing trend amongst outlets that publish celebrity gossip. The conversations surrounding celebrities are no longer from the perspective of their talents; contemporary conversation is so emphatic that it is now invading the personal realms – exemplified by the comments about Ramsay’s weight.

Whilst Ramsay has taken it in her stride, it shows the intense and often malicious scrutiny that celebrities find themselves under. A recent spate of high-profile suicides supports the idea that there is not enough protection for celebrities when it comes to social media and their mental health, as well as the fact that online abuse is becoming endemic. Currently, due the online sphere being a relatively new phenomenon, there are no systems of support and social media companies appear to have little interest in combatting hate on their platforms. MA-Change pride themselves on the fact that we are always mindful of the mental health of our clients and their family members and offer expert services to alleviate the pressures, as well as social media consultation.

This sort of abuse is arguably facilitated by the British tabloids, which are considered to be amongst the most ruthless in the world. These outlets provide a steady stream of commentary, gossip, opinion, and criticism, which in turn encourages the public to do the same, exemplified by the fact that tabloid papers such as The Sun and The Daily Mail are the most widely read papers in the UK. However, society and culture are starting to move away from this attitude as the effect of online discussion makes itself apparent as media and entertainment is thrust further into the public eye. Furthermore, increasing levels of ‘wokeness’ – which is being alert to prejudice and discrimination – means audiences are less tolerant towards perceivably abusive or controversial opinions, such as the ‘fat shaming’ that Steve Allen perturbed. Changing mindsets means there is less demand for tabloid opinions and disparaging comments are generally seen as unacceptable, thus demonstrating a changing landscape when it comes to celebrity gossip.

Celebrities themselves seem fairly divided on the issue. Whilst some welcome the changes in attitude towards commentary, others reject the notion that their feelings need to be catered for. The divergence seems to occur between older entertainers and the contemporary wave of popular talent. Some celebrities encourage people to speak how they want, supporting notions of free speech and perhaps even a ‘stiff upper lip’ attitude, whilst others look to protect those who are most vulnerable to public criticism and find personal comments about weight, looks, or issues in their personal life to be ‘over the line’ – thus encouraging more positive content.

So, in this sense, has the line been thickened? Are the standards to which we hold discussion being expanded as the Western world moves deeper into a digital culture? Certainly, there is less tolerance for disparaging comments. As aforementioned, with increasing levels of celebrity suicide, as well as more people speaking about their battles with mental health, there is far greater consciousness of the humanity of celebrities, which encourages people to treat them how they themselves would like to be treated. On the other hand, whilst the public does become more aware of how publicising their opinion can be detrimental to health of the subject, there is backlash over the change in attitude. Many older members of the public, as well as historically popular celebrities, feel the change of attitude is unnecessary. Celebrities literally profit off the attention of the public and are where they are because of the intensity of the interest in their lives. In this sense, it could be considered hypocritical for these personalities to lament the nature of the discussion around them, as it was exactly that type of discussion that fuels their reputation. So, maybe the line has been thickened about what is and isn’t acceptable to talk about when referencing individuals in the public eye, but that does not mean the culture of it is failing. In fact, with more and more people becoming technologically able, the expansion of audiences will deepen the ‘culture conversation’ that currently thrives in western societies – whether that is for better or worse is yet to be seen.