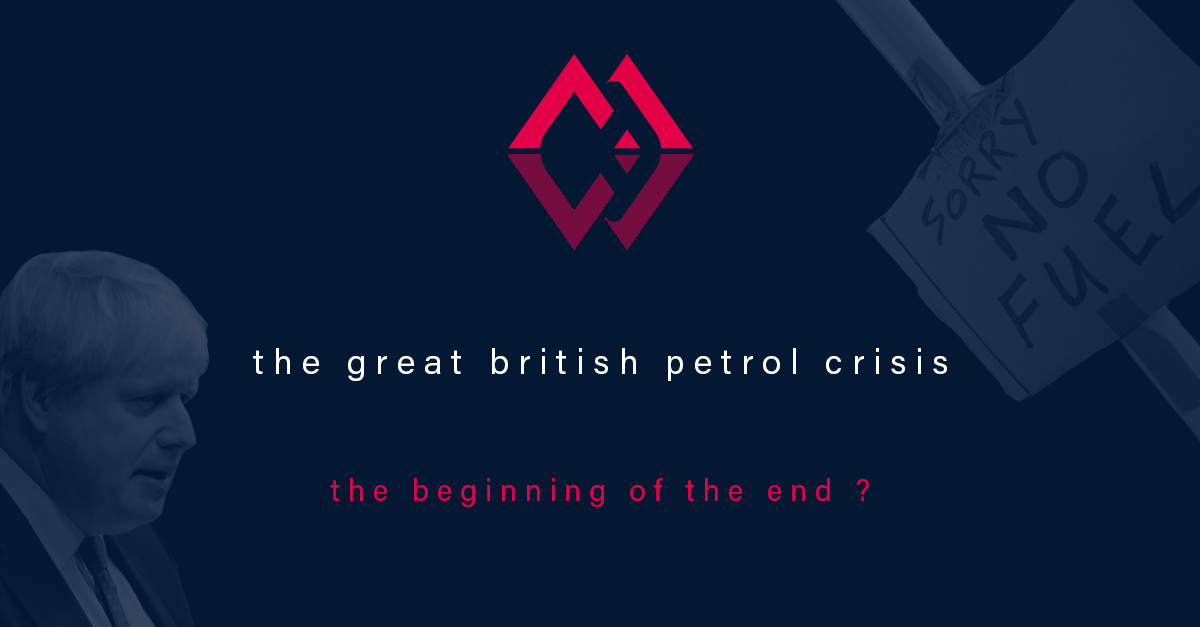 The Great British Petrol Crisis: The Beginning of the End?

The petrol crisis threw the UK into crisis, but is this merely a sign of things to come?

In September 2021, the UK was thrown into crisis when BP announced the closure of some of their outlets due to transportation issues. This set off a chain reaction of panic buying amongst the British public, which led to petrol and diesel shortages across the entire country and posed new questions about our capacity to deal with dwindling resources, as well as the implications of Brexit and future pandemics for the future of the UK.

“It’s important to stress there is no national shortage of fuel in the UK,” Kwasi Kwarteng – the UK’s business secretary – said to Sky News. A disruption in the localised services, bolstered by a 100,000-person shortage of Heavy Goods Vehicle (HGV) drivers according to the Road Haulage Association, created a panic which rippled across the country. Tankers could not fill the forecourts fast enough to cover the panic drain. Although other countries have been affected by a shortage of HGV drivers, such as Poland and Germany, they have not resulted in long queues at petrol stations or notably empty shelves in supermarkets, showing that the UK is most certainly experiencing the worst of this crisis.

One of the reasons for this driver shortage is the COVID-19 pandemic. When the UK locked down in March 2020, HGV instructors and testers were not able to continue under the work from home order. The backlog created from this and exacerbated by the long delays and staff strikes at the DVLA, has resulted in around 50,000 outstanding licence applications.

Also, many EU HGV drivers, which the UK relies on to transport goods throughout the country and from the European mainland, went back to their native countries. Brexit – which has been progressing in the meantime – has restricted the movement of workers into the UK, which means it is fiercely difficult for EU nationals to return to Britain. A steady decline of the Pound against the Euro, meaning it is less lucrative for European drivers to come and work in Britain, has also discouraged drivers from returning to British jobs. Britons are failing to fill these jobs because of dwindling pay, unattractive hours and working conditions, and post0Brexit immigration rules. The combination of all these factors has reduced the number of HGV drivers that are readily available.

But the main cause of the fuel deficit is the UK’s mainstream media. As seen throughout the COVID-19 pandemic, media outlets have promoted populist stories that pray on people’s fears, thus driving up the traffic on their website and earning them money through advertisements. These stories are popular as people want to alleviate their fears by understanding and following a crisis, rather than being ignorant to the dangers. Consequently, a proliferation of these stories for profit exaggerates the crisis, and encourages panic buying which has led to national shortage of fuel. This demonstrates the power of the media, and the power of the platforms that they distribute on. Social media creates a mass audience for these outlets, and so their stories have a greater reach than ever. Thus, when media companies exaggerate a story for online clicks, the fallout it has on society is greater – as seen in the panic buying that followed the stories of fuel shortages.

The Government have several different options for managing crisis situations. The Department for Business, Energy, and Industry Strategy published a summary of their crisis communication plan, detailing the various tools at their disposal should the UK experience a petrol shortage. The first strategy which they can and have employed for this crisis is allowing exemptions from the Competitions Act. This allows competing companies to work and liaise together for scheduling and cohesion reasons. Although this won’t instantly improve the lack of drivers, it will improve some of the devastating regional shortages that have affected many remote areas of the UK. Secondly, an expansion of the legal limit on driver’s hours was granted by the Department for Transport. However, most haulage companies would be wary of issuing these hours to their drivers as they would be liable if an accident occurred due to fatigue.

This means that the Government need to incur more practical solutions onto the issue. For example, the UK has a fleet of petrol tankers in reserve, but the lack of drivers means they are obsolete. The Government has turned to the army to help supply petrol stations, employing forces to do so around 5 days after the crisis scenario occurred. Additionally, temporary visas have been issued for EU nationals that are struggling to return to the UK, however the uptake has been poor, with only 27 applicants of 300 visas granted.

But will these solutions ensure that these difficult times won’t happen again? As the world continues to have its fossil fuels decimated by businesses and states, the issue of scarcity will become far more prevalent, and it is fair to say that the UK has not displayed a great deal of competence when tackling the problem. But this crisis was borne of a multitude of factors; global supply chains, the consumption of fossil fuels, COVID-19, Brexit and the free movement of people, changing work patterns, and the mainstream media all had a role to play. Until we learn to deal with these issues with greater effect, the worst is probably yet to come.