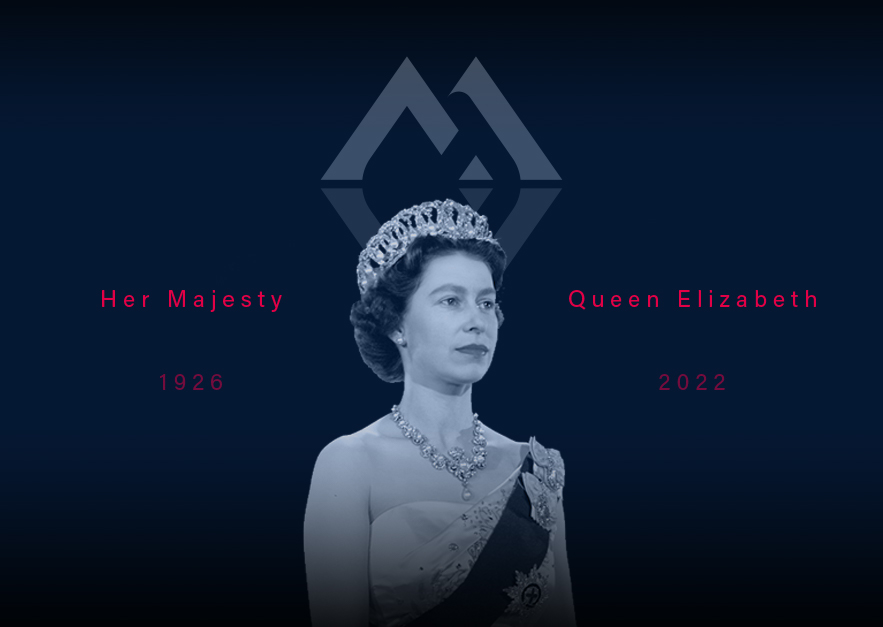 Remembering Her Majesty, The Queen: A Master of Crisis

During her 70-year reign, the Queen oversaw profound change in Britain and the world, standing solidly as a representative of her country with strength and grace throughout much turmoil. Her ability as a leader and peacemaker was unrivalled and many Britons found solace in her constancy amidst a world of change.

A worldwide symbol of resilience, and courage – we look back at how her Royal Highness handled crises and controversies on a personal, national, and global scale, through drama that captured international attention.

Queen Elizabeth II went through the first major crisis of her reign when her sister, Princess Margaret, was at the centre of a royal controversy. 1953 was a critical time for the monarchy in post-war Britain, as the Church of England, which had been a great source of strength for Britain during World War II, was struggling to maintain leadership.

When Princess Margaret accepted Peter Townsend’s marriage proposal, Queen Elizabeth took action to protect the country and her family from a tirade of scrutiny and sensationalism. Townsend was a Group Captain in the RAF and was divorced, meaning Princess Margaret would have to renounce her royal privileges to marry him. This would have been another slight on the Church of England, as well as fuelling the idea that the royal generation of the time was in turmoil.

Elizabeth convinced Margaret to delay her decision for a year until she was 25 and would therefore not need sovereign permission. This not only avoided a difficult political situation for the Queen, but also retained Margaret’s trust in her whilst protecting the Church from embarrassment.

Like many of Britain’s former colonies, the Republic of Ireland has a complicated relationship with both Britain and its monarchy. Queen Elizabeth II remained head of state in the six counties that make up Northern Ireland, which is still part of the U.K.— and a point of friction for 70 years. During the violent period of the late 1960s to late 1990s known as ‘The Troubles’ more than 3,700 people lost their lives, including Lord Mountbatten, a cousin of the Queen, killed in 1979 by an Irish Republic Army bomb.

Queen Elizabeth II was committed to the reparation of relations between the two countries, despite her personal grievances and the crown being seen as a symbol of oppression in Ireland. This didn’t perturb Elizabeth as she knew the monarchy could be used as a ‘force for good’ to encourage respect and understanding between the two sides.

This was demonstrated in 1993 when Her Majesty invited Mary Robinson, the President of the Republic of Ireland at the time, for tea at Buckingham Palace. Robinson was the first Irish president to visit the UK and arrived amid the backend of ‘The Troubles’, showing to the world that an amicable solution could be found despite the historical grievances between the two countries.

“Two heads of state, two women, equal in office, standing there, it meant a huge amount,” said Robinson of the meeting.

The Republic of Ireland reciprocated the hospitality in May 2011, when Queen Elizabeth II became the first British monarch to visit the young state. Most notably, she and Irish President Mary McAleese laid wreaths at the Garden of Remembrance, and Elizabeth opened her speech with a greeting in Gaelic.

“Everyone in Ireland saw that, and it symbolised that she profoundly understood that we had to become good neighbours” acknowledged Robinson again.

Managing the press as well as public scrutiny became an important task for the Royal family. The Queen was the first British monarch to truly feel the power of the press, and had to work hard to make sure they were appeased whilst protecting her family. Despite this, the Queen and her family were often front-page news.

The death of Princess Diana in 1997 was unquestionably the worst crisis in the Queens reign. Whipped up by the press, the public turned on the Queen. They criticized Elizabeth for not immediately cancelling the family holiday she was on at the time, and many Britons viewed her public comments as too little too late. Furthermore, a failure to fly their flags at half-mast tarnished Queen Elizabeth’s reputation for compassion.

However, the Queen has worked hard to change her image and that of the monarchy. She hosted a rock concert at Buckingham Palace to celebrate her 50th anniversary on the throne in 2002 and gave her blessing to the marriage of Prince Charles and Camilla Parker Bowles.

She also made sure the Royals acted appropriately and in the interest of the public concerning future sensitive matters. This was seen most prominently in the ‘Megxit’ scandal that surrounded her Grandson, Prince Harry, and his new wife Meghan Markle.

In 2020, Prince Harry chose to step back from his position as a senior Royal Family member to the disappointment of the family and the public. Reacting much more in sorrow than in anger, in a statement to the press, the Queen said “My family and I are entirely supportive of Harry and Meghan’s desire to create a new life as a young family. Although we would have preferred them to remain full-time working members of the Royal Family, we respect and understand their wish to live a more independent life as a family while remaining a valued part of my family.” This was effective as it conveyed to the country her support for both Harry and Meghan, alleviating any more negative press and public anger.

COVID-19 and the Passing of Prince Philip

During Britain’s third national lockdown, at a time of global crisis, and in the wake of over 100,000 UK casualties, Queen Elizabeth’s husband, Prince Philip, passed away.

With lockdown laws limiting the number of guests at funerals and social distancing laws enforced, her Majesty sat by herself for the duration of the globally televised ceremony.

With lockdown causing much public tension, this display of strength and solidarity from The Queen showed Britain, and the world, that she too was restricted by the same pandemic laws as everyone else, and that she was also doing her part to limit the effects of COVID.

The proceeding revelations of Downing Street’s disrespect for their own rules only endeared her Majesty to the public to an even greater degree and gave perspective on her dignity and nobility.

Queen Elizabeth II will be revered as one of the greatest leaders of the modern era. A great leader not because of power held, but because of the devotion to duty. Through her reign the Queen brought humility and respect in all her actions. She understood the changing roles of the crown through varying decades including changing society norms. She understood that national prosperity was not just achieved through governance, but also through spirit and dignified leadership. Her leadership over seven decades has left the British Monarchy with steadfast and robust public support. Keeping a level head in moments of crisis became Queen Elizabeth’s trademark and her selfless duty and service has left the world a better place.